This page is dedicated to the memory of Marie Miller, who passed away February 20, 2010, with her family by her side.

As many of you know, Marie was diagnosed with throat cancer in 1989 and despite a poor prognosis, she overcame the cancer and lived energetically and passionately for 20 years.  In November of 2009 the cancer returned and despite an initially promising prognosis and successful surgery, it was soon discovered that the cancer had spread unusually quickly and aggressively.  When the effects of the cancer and the accompanying complications proved too much for her body to handle,  the focus shifted to making her comfortable.  She passed away peacefully and without pain.

Donations in Marie's memory may be made to any local public radio station, the American Cancer Society, the Oregon Shores Conservation Coalition, or any agency devoted to protecting coastal regions.

What We Are Celebrating

Marie had a strong and lively spirit. She loved to climb trees and never failed to explore every fork in the trail. She also had a great sense of humor and a playful soul. She could not pass a sliding board without going down it - on one occasion inspiring her 80-year-old mother to do the same thing. Her joy was infectious that way. Once when we (Kim & Tamara) came home for a summer visit, she got the idea to take apart our beds, move them from our basement room, and put them back together in a tent in the backyard - just for kicks. So she did it. We arrived to find our beds in the back yard, slept out in the tent that night and had a great time.

Marie had a feisty streak as well, which showed itself during her hospital stay more than once.  She started off referring to the phlebotomists who descended at regular intervals for samples as the "blood bombers," because they never came quietly into the room regardless of the hour, and at some point along the way they became "blood pirates."  One day one of the nurses was figuring out how much medication to give her and said, “oh, you’re a small thing." To which Marie, despite her recent jaw surgery, clearly replied: “Another time, another place - I could take you." None of us, including the nurse, had any doubt about that.

Marie had a keen intellect and her mind was always engaged. She was an NPR junkie and especially sought out science and medical news, and never passed up a brain teaser or logic puzzle.  She enjoyed engaging Tamara in philosophical and ethical discussions around the camp fire long after the rest of us had given up contemplating anything more abstract than our s’mores.  She ended almost every day by reading a short mystery story in bed, or at least starting one -- often Don would come in to find her asleep with the book resting on her nose.

Marie channeled her abundant positive energy into a wide variety of creative projects. She was a talented artist and crafter and could make or fix almost anything. She especially enjoyed restoring and refinishing wood furniture. Over the years her projects ranged from gardening and canning to making clothes (even some stylish fashions for our Barbie dolls), quilts and afghans to building a gazebo in the backyard. She rarely sat still and was usually doing at least two things at once; she would do jigsaw puzzles while talking on the phone, crochet or paint crafts while watching TV, and usually had 2-3 kitchen timers set at any one time to keep track of everything she was doing. She was also very interested in genealogy and did extensive family tree research for both her and Don’s sides of the family.

Marie was well known for the concern and helpfulness she extended to others. Her thoughtful nature was evident in the cards and letters she frequently sent to family and friends -- she always sent off a cheerful handwritten note as soon as she heard someone wasn't feeling well,  and she often donated eggs or other supplies to fellow campers who found themselves a bit short.  I (Tamara) remember casually mentioning on the phone one day shortly after starting grad school that I'd broken my favorite coffee mug, a thrift store find made of vintage Japanese stoneware, and under the Christmas tree that year were not just one but three identical mugs -- I'm still not sure how or where she found them but it was very typical for her to remember something like that, so seemingly trivial that most of us would have forgotten all about it before we'd even hung up the phone. 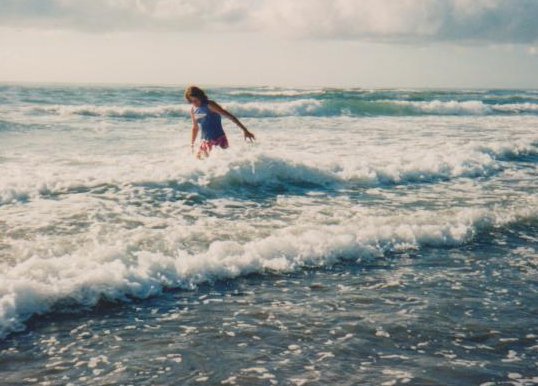 Marie first visited the Pacific coast in 1987 and instantly found her soul's home. She loved the ocean and spent as much time as she could camping and exploring the beaches of the Washington and Oregon coast. She was never happier than when she was walking along the shoreline discovering whatever treasures the ocean had to offer. During the coming year the family will gather to scatter her ashes on the beaches she so loved.